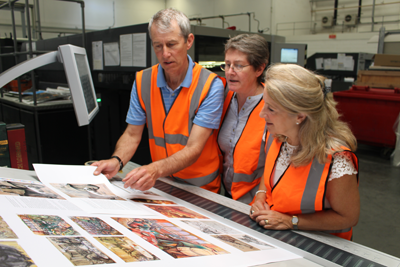 The Cornish family at Elanders printing

We are pleased to announce that our new publication entitled: Behind the Scenes: The Norman Cornish Sketchbooks is now with our printers in Newcastle, with delivery confirmed for early September 2017.

The book will be launched at the Durham Book Festival on October 14th with a panel discussion chaired by Michael Chaplin. There will be a follow up local launch at the refreshed Coming Home exhibition at Spennymoor Town Hall on Thursday October 19th at 7pm. The retail price for Behind the Scenes will be £30 and copies will only be available online at www.normancorish.com and selected outlets across the region and nationally.

Please direct further enquiries to: This email address is being protected from spambots. You need JavaScript enabled to view it.