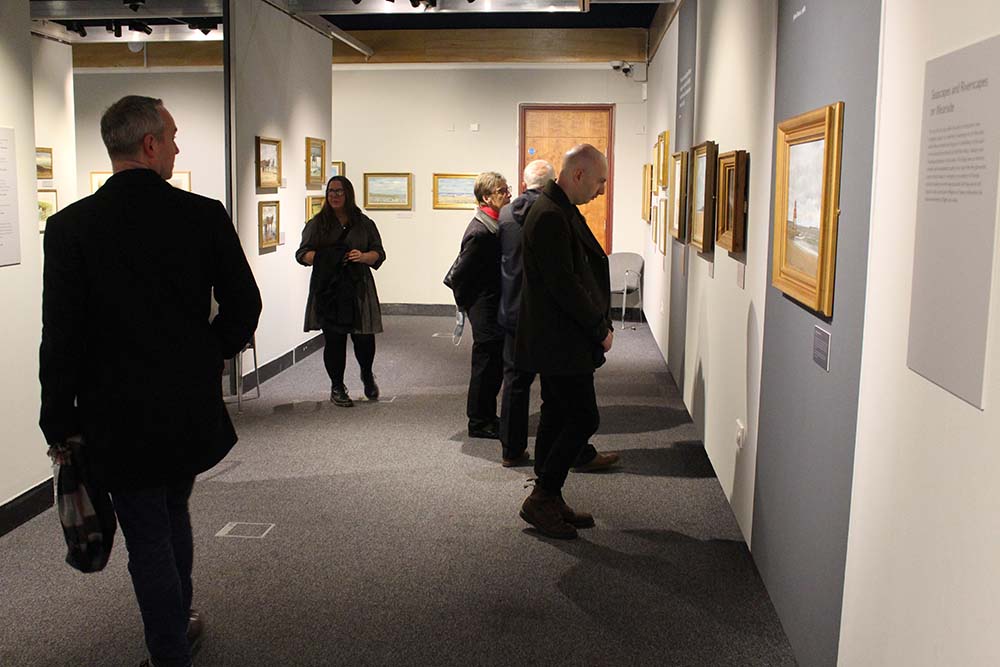 John Peace studied at the South Shields School of Art from 1949-51, then at Leeds before gaining a place at the Slade School of Fine Art in London. He had a lifelong career in painting, as well as teaching art, and produced hundreds of paintings many of which captured the landscape and aspects of social life in the changing region around him. It was a career deeply influenced and shaped by his time in South Shields.

This major exhibition opens on November 13th until May 7th 2022 and brings together a significant selection of some of his finest work. It focuses on landscapes, many depicting the region’s coast and rivers, as well as the area around Lemington, where he spent most of his life, and includes paintings of South Tyneside and Sunderland. Landscape was Peace’s main interest but he also produced many paintings of other subjects and a section of the gallery will present examples of his portraits, still lifes and scenes of family life.

Above all Peace was interested in capturing the effects of light. His compositions were often simple and painted with a narrow range of colours to create a powerful striking view of the world around him. Tyne and Tide provides a unique opportunity to see many of his best paintings including those owned by his family, alongside a number of loans from private collections. 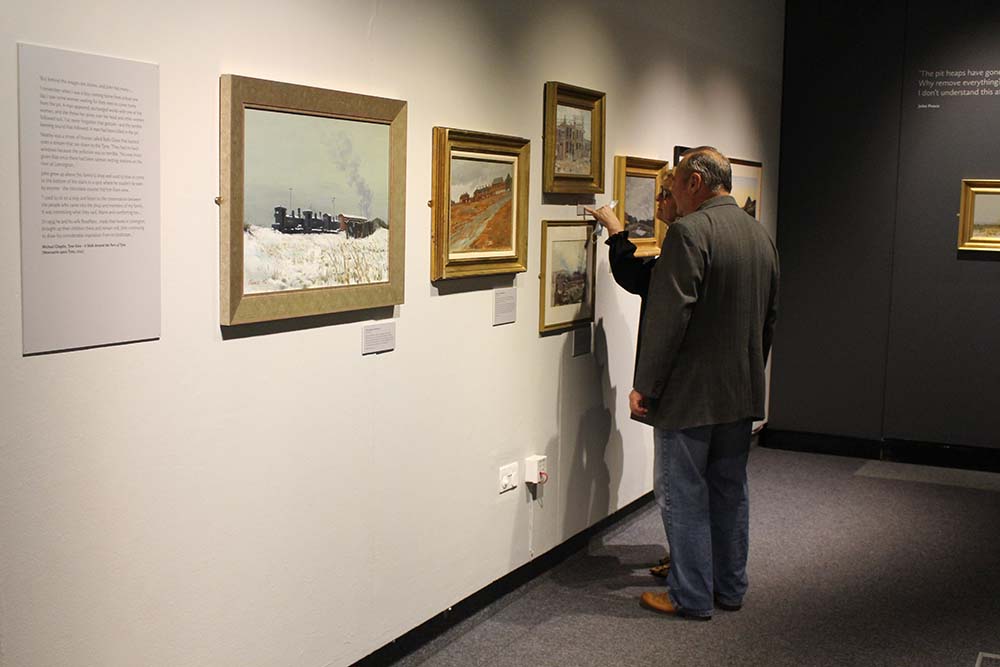 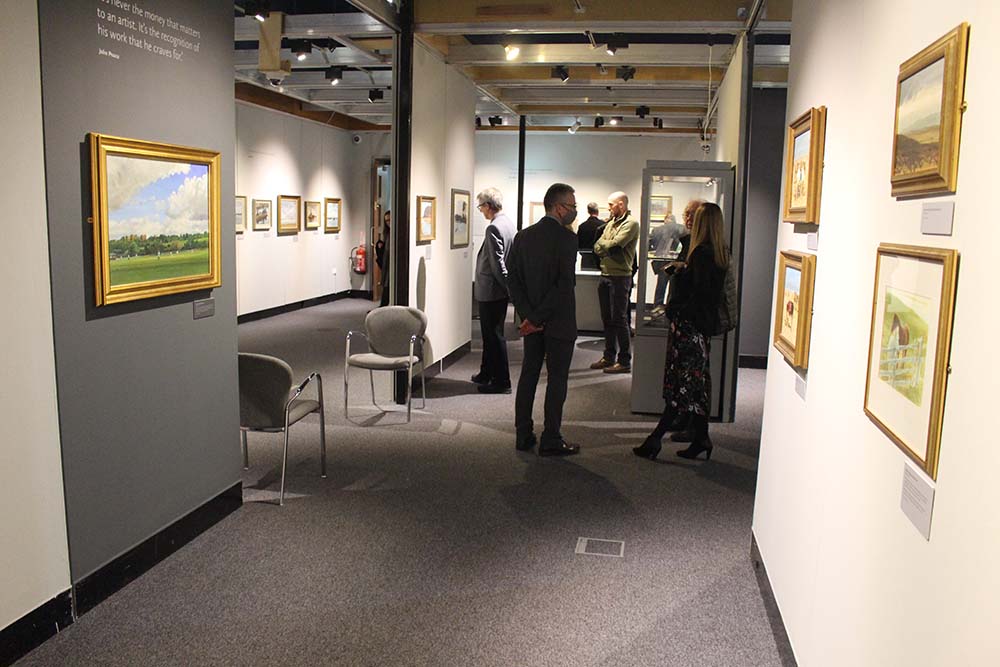 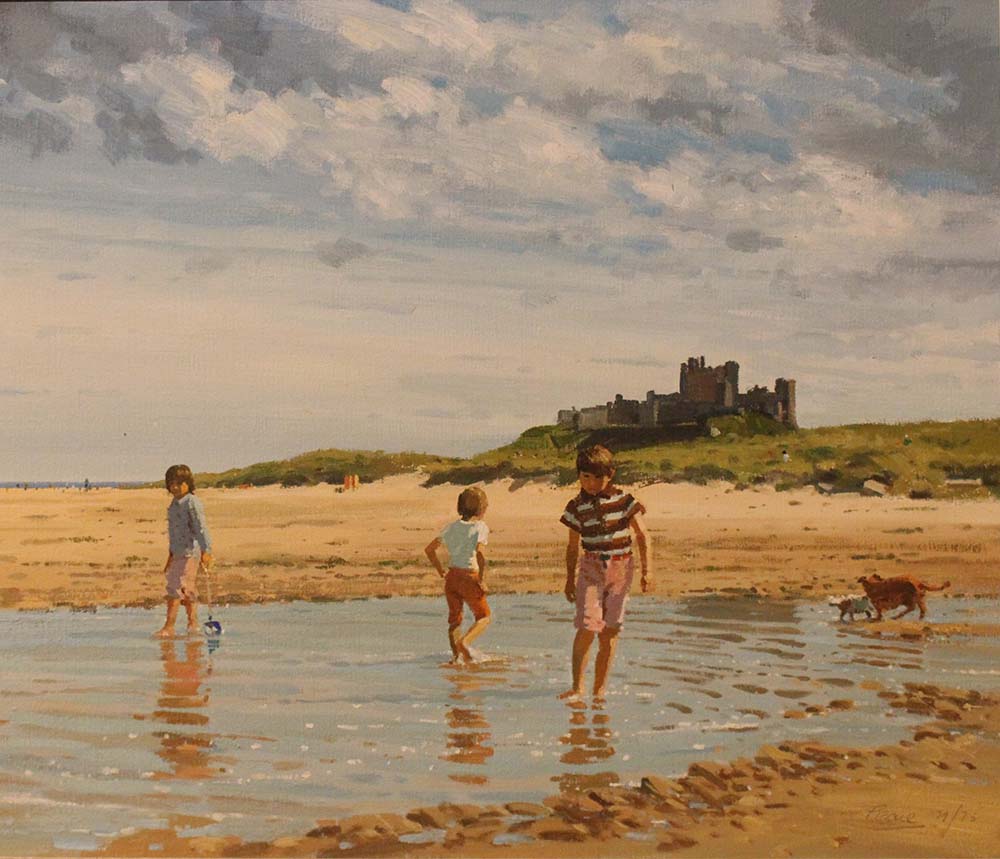 The featured map is an extract from ‘Behind The Scenes: The Norman Cornish Sketchbooks’ and shows the layout of rail tracks and the industrial landscape around Bishops Close Street, along with the beginning of the Pit Road to Dean and Chapter Colliery. There was a complex arrangement of tracks prior to the ‘Beeching Axe’ in the early 1960s which resulted in thousands of stations and railways being closed.

The web of rail tracks connecting collieries, as well as towns, required a control mechanism and signal cabins played an enormous role in ensuring the trains were guided onto the correct section. Numbers 1, 2 and 3 refer to images in the book but are not included in the detailed extract. The scene was most likely repeated in most of the industrial areas of the UK but Cornish rarely used the train apart from travelling to his exhibitions in Carlisle and London.

His first encounter with a signal box outside of Spennymoor was most likely at the Trimdon Crossing, waiting in the bus, on his way to meet his future wife Sarah, who lived in Trimdon.

Bishop Auckland was also a hub for connecting rail lines and immediately adjacent to Bishops Close Street was the Merrington Lane signal box. As the collieries closed in the early 60s the lines and buildings became redundant, but simultaneously they became an adventure playground for children with structures to climb and crawl all over.

The redundant rail lines were features within themselves and to the unwary a ‘trip hazard.’ Alison Servant (nee Veitch) was one such casualty. During a visit in 1962 to ‘play out’ with Ann Cornish Alison recalls tripping over one of the rail lines at the end of Bishops Clos Street. Sarah Cornish took Alison to see the local Doctor to have her head stitched and she still has the scar on her forehead! Her abiding memory though is of sitting listening to Ann’s dad playing his banjo to help cheer her up following the unfortunate accident. A few weeks later there was a special treat for the girls. Ann’s dad took Alison and Ann to visit the Stone Gallery in Newcastle. Alison recalls being introduced to an old man dressed in black sitting in a corner – LS Lowry. To be continued …….

The Band Played On:

Spennymoor Town Band recently made the headlines when it represented the North of England at the National Brass Band Finals of Great Britain in Cheltenham. The article, featured in the Northern Echo during September by former editor Peter Barron, covered the band’s history and the steps taken to overcome the lockdown restrictions as they prepared for the big day representing Spennymoor on the national stage.

In 1962 Cornish was commissioned by Durham County Council to paint a Mural depicting life in County Durham. During his research for the composition of the Miners’ Gala Mural Cornish immersed himself in many of the Spennymoor Town Band rehearsals to observe and draw the instruments and musicians playing. He would ‘sit in’, watch and listen as he made his drawings during these sessions. He also researched the marching formation of the band to ensure absolute accuracy.

The Miners’ Gala Mural is a highly significant work of art that goes to the very heart of culture and heritage in County Durham. Many people in the area identify with this inspirational record of a bygone era.

A detailed account of the story of the Miners’ Gala Mural may be found by clicking on the Home button of this website and opening Durham Miners’ Gala.

In March 2020 the Mural was re-located to Bishop Auckland Town Hall to become part of a permanent display. If you make a visit, then take a few moments to reflect about the attention to detail in this picture that became a cornerstone of Cornish’s career, and the commitment of the members of the band.

The Spennymoor Town Band finished 6th out of 14 finalists and did the region proud. The future looks promising indeed. Michael McDonald, aged 12, who plays the Cornet, is one of the rising stars and won ‘Youngest Player Award’ in the finals.

Congratulations to all of the members of the band and if you would like to hear the band in action, the ‘Christmas Concert’ takes place at Spennymoor Town Hall on December 4th at 7-30pm. Tickets: www.spennymoor-tc.gov.uk

Norman Cornish was born in Bishops Close Street in 1919 and lived there for many years until 1967, apart from a short period between getting married in 1946 and 1953 when he and Sarah ‘lived in’ with his maternal grandmother. The street consisted of blocks of ‘two up two down’ colliery houses with a railway line and steep embankment at the end of the street, nearby gasworks, a slag heap and the start of the pit road to Dean and Chapter Colliery.

For children growing up in Bishops Close Street the immediate environment by any standards would be declared unsuitable for habitation and potentially dangerous for ‘bairns’ and ‘grown ups’. John Cornish often commented that, ‘to the children it was like a large adventure playground,’ but not without hazards.

The safest place for children to ‘play out’ was the street, and not just in Bishops Close Street. With very few vehicles, some horse- drawn traders, and the ice-cream van on a Sunday. The streets became the playgrounds for ‘the bairns.’ For an artist advised early in his career to ‘paint the things around him’ the children ‘playing out’ at all times of the year was an obvious interesting subject.

A skipping rope became a magnet for activity. ‘All together girls’ would be played with a rope or sometimes a washing line. This would turn faster but risked hurting the back of the legs if the timing of the jumps wasn’t synchronised. Sometimes there would be a ‘turner’ at each end of the rope or one end could be tied to a lamp post. One mistake and it became your time to be the turner. For the more accomplished ‘Double Dutch’ with two turning ropes became the big challenge.

There were other games too; ‘Scissors, Paper, Stone’, ‘Two ball against a wall,’ Chucks and different games using a ball and tin can. Girls would do handstands and cart wheels with skirts tucked into knickers, and of course - marbles. The lamp posts became an early version of floodlights for the activities including football.

Little Sheila (as she was known) became the subject of a portrait. One day in 1961, Sheila was ‘playing out’ when Cornish asked her ‘if he could paint her portrait’. The picture was started as a rough sketch which became the finished work on the rear of a box of Cadbury’s chocolates. Sheila lived in Bishops Close Street and she concentrated by watching Andy Pandy on BBC children’s TV.

An Enquiry from the USA

Norman Cornish is one of the most celebrated 20th Century artists whose work is held in public and private collections throughout the UK and beyond. ‘Long lived and prolific’ would be a succinct description of his life and career as a professional artist. It is hardly surprising that many of his early works have for many years been ‘handed down’ to succeeding generations of family members via inheritance.

Occasionally a Cornish painting appears under unusual circumstances and in the summer of 2020, one such painting originally purchased by LS Lowry at The Stone Gallery (Newcastle) featured in an auction in Glasgow. More recently an enquiry was received initially to The Spennymoor Settlement from an owner in the USA. The provenance was fascinating.

The fourteenth annual Sketching Club exhibition in November 1946 was to prove pivotal in the career of the young artist. G Stevens a London art exhibition organiser and professional artist was quite taken by the quality of the work by Cornish. His visit was followed by another visitor, Dr R.W. Revans, Director of Education to the newly created National Coal Board and he bought five pictures for display in Hobart House, HQ of the Coal Board in London.

Dr Revans was later inspired to organise the ‘Art by the Miner ‘exhibition in October 1947 held at the Academy Cinema in London’s Oxford Street. Cornish was invited to include seven works and also ‘hang the exhibition’ in view of his previous experience at The Spennymoor Settlement. He had to hang the exhibition twice because the members of ‘The Ashington Group’ insisted that their work should be hung together. The Ashington Group and their activities were later to receive acclaim as the subject of a successful play written by Lee Hall who also wrote ‘ Billy Elliot.’ Norman and Sarah Cornish were guests of honour at the first night of ‘The Pitmen Painters’ at the Theatre Royal, Newcastle in 2011.

Dr Revans was later to become a pioneer in the concept of ‘positive ethos and improved performance’ in organisations, although the idea was slow to filter through to the management of collieries.

Cornish’s skill and confidence as a natural communicator resulted in him being invited to be interviewed live on television for the first time at Alexandra Palace studios in North London during the exhibition.

His painting titled, ‘Big Meeting’, along with the other four paintings and his subsequent TV appearance may in time be viewed as one of those moments which became pivotal in his emerging career as an artist. The painting was later purchased by a relative of the person who made the enquiry from the USA.