The cost of materials to broaden the experience of the members of the Sketching Club was often prohibitive. However, as their reputations grew across the region via the annual exhibitions, an enthusiastic admirer of Cornish’s work donated 10 Guineas to Bill Farrell, Warden of The Settlement, to purchase oil paints for the benefit of the members of Sketching Club. The benefactor was Mrs. H.C. Baker- Baker, of Elemore Hall, County Durham: ‘a charming, gentle, cultured woman and a good friend of the Spennymoor Settlement.’

Suddenly, a new dimension to Cornish’s early work was enabled via this philanthropic gesture and Cornish was quick to respond with his first oil painting, a study of ‘My Sister Ella.’ This was painted over several days in his parent’s bedroom and exhibited in 1940: ‘Works of Artists of the Northern Counties annual exhibition’ in the Laing Art Gallery, Newcastle, often referred to as the ‘Royal Academy of the North.’

Painting in oils was a huge step forward for the young Cornish and an approach which required a new technique as well as additional materials such as canvas, stretchers, brushes, oil paints in tubes, palette knives, primer (first coat of paint on the canvas),and turps for cleaning. Together these materials emitted an unpleasant odour and a supportive wife was essential!

A regional newspaper article in 1960 referred to Sarah Cornish as an understanding woman who is dedicated to her home, husband and family. Sarah Cornish is essentially patient and sympathetic, otherwise she would not tolerate the paint splashed wallpaper, the brushes, canvasses and sketches amongst cosmetics on her dressing table.

The acquisition of the materials to work in oils and the opportunity to develop this aspect of his work began to exert a profound influence upon his development as an artist. A whole new dimension to his subjects and their visual interpretation emerged as his career developed in the post war era. Examples of Cornish’s oil paintings are included in the Permanent Collections at The Laing Art Gallery, Northumbria University and in many public and private collections throughout the UK and beyond.

Behind The Scenes: Berriman’s Chip Van

Cornish’s work provides an important social record of the cultural landscape of his era and there is no finer example than Berriman’s chip van. An early version of the modern ‘takeaway’ but forever immortalised as an icon of a period of time in Spennymoor. The chip van had several locations during its life-time but eventually located near Thomas Street, a short distance from Bishop’s Close Street and remembered as one of the locations on the Norman Cornish Trail.

Not only did the three Berriman brothers grow their own potatoes, they brought them to the chip van ready peeled and the fishcakes were later supplied from Hanselman’s fish shop, across the road on the High Street. Sue Snowden (nee Hanselman) Lord Lieutenant of County Durham, remembers with pride and affection how her father supplied fishcakes of the finest quality to the Berriman brothers.

The chip van was acquired by Beamish Museum in 1972 when the brothers retired. After a number of years the restoration was undertaken by Staingate Restorations so that it would become available in the museum as part of the collection. The chip van made a nostalgic return to Spennymoor in 2011 for three days at Rosa Street School and Cornish was able to spend some time talking to visitors and staff from Beamish, sharing his memories. Cornish and the famous chip van later appeared in a BBC documentary with Dan Cruickshank who discussed this piece of local history in the artist’s studio. Berriman’s Chip Van is now parked near the High Street in the 1950s Town at Beamish Museum where you can also visit 33 Bishops Close Street, the Cornish family home from 1953 until 1967.

The chip van used to belong to George Kirtley but was taken over by the Berriman family and changed appearance. They kept all of the cooking pots, the pans, the chip maker and the little cupboards where the potatoes were kept. I knew the family. They used to live in Duncombe Street, opposite the Town Hall, and had a yard where the horses were kept. They also used to deliver coal and had a funeral business with black horses and black hearses. On a Saturday night when everything was closed, they would use a horse to bring the chip van back to their yard for safe keeping and bring it out next morning. The three brothers grew their own potatoes and when they were working, one was slicing the potatoes, one serving and the other in the pub!

I knew all three lads, Dougy the oldest, Billy and Dickie. They had another older brother I never actually knew until I met him down the pit as we were coming out.

Because I am an artist who paints people, this chip van is a must, an obvious good subject for a painting.

Berriman’s Chip Van is one of the subjects featured with additional drawings and images in Behind the Scenes: The Norman Cornish Sketchbooks available on line at www.normancornish.com 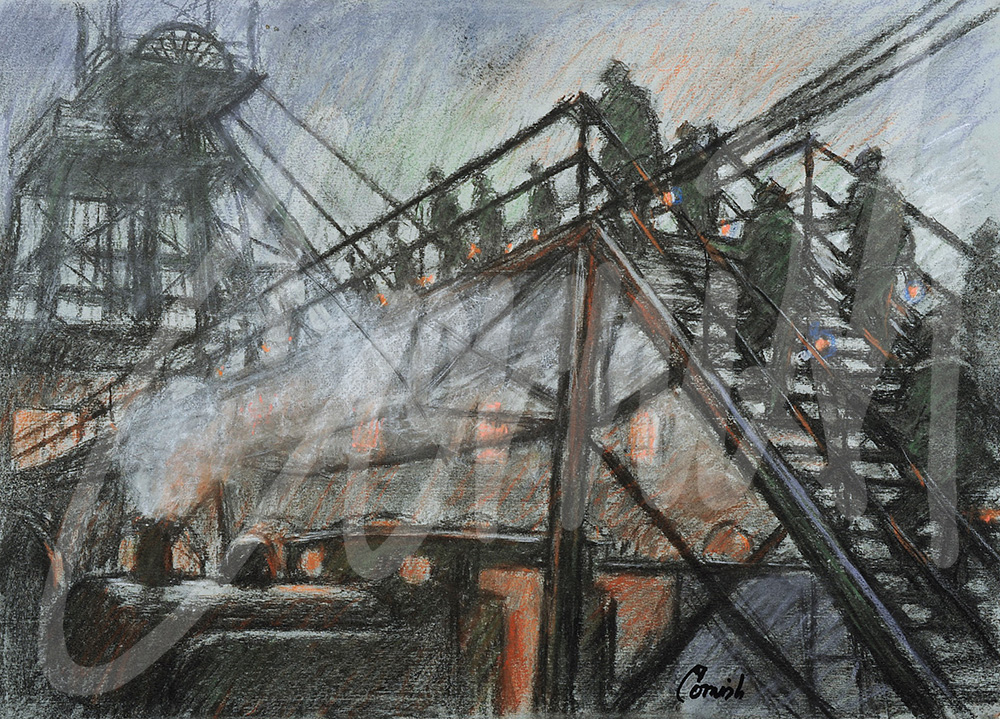 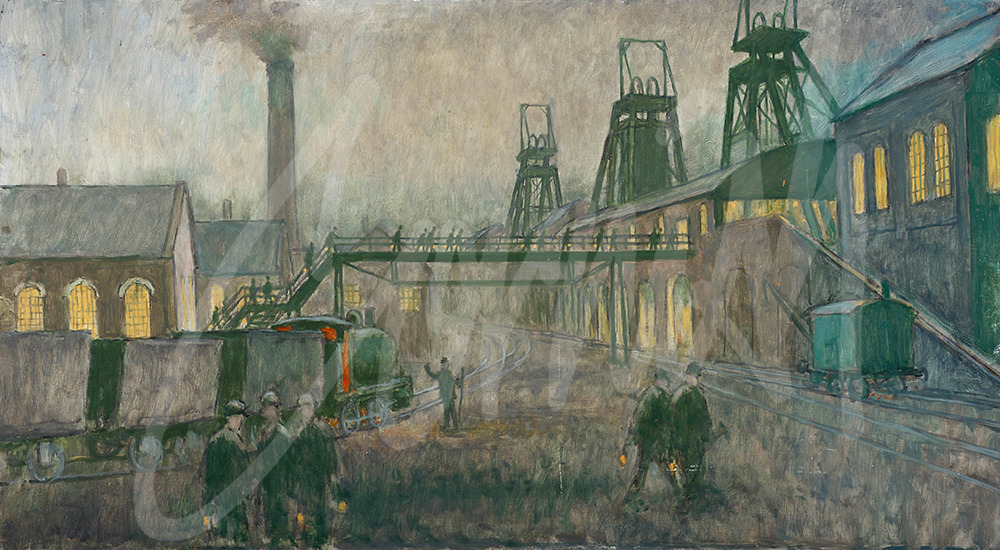 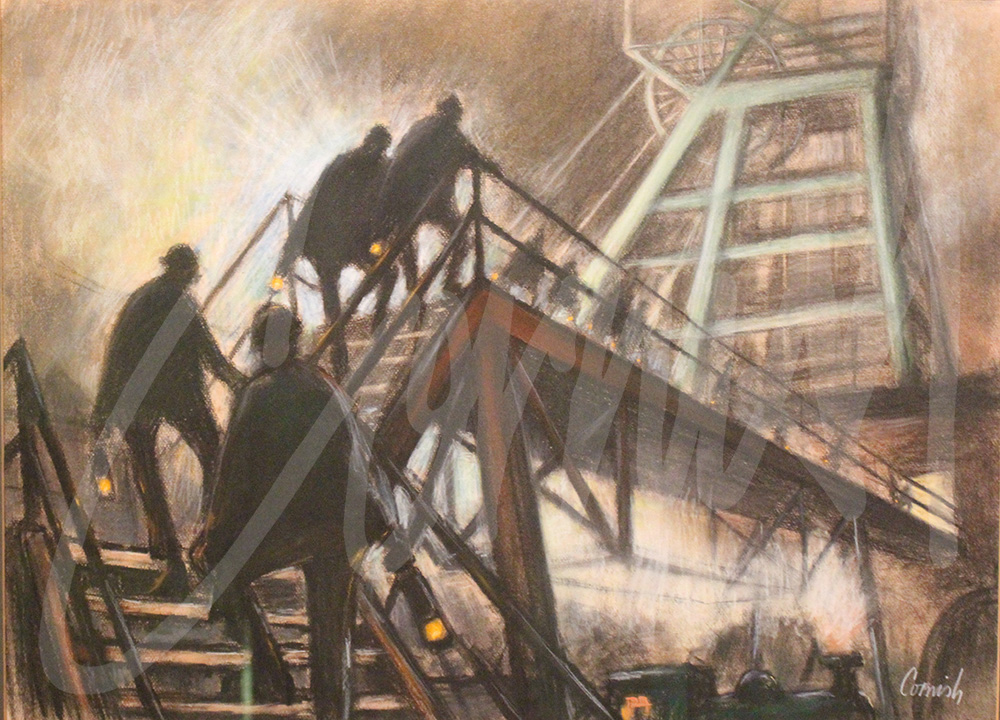